Valued by ancient Egyptians, Greeks, and Romans for its medicinal properties, chamomile continues to be prized as a soothing herb today. Often featured in teas as well as soaps and cosmetics, chamomile plants come in two basic varieties: Roman chamomile and German chamomile. Although the types differ in terms of their growth habits, both feature the same medicinal properties and are easy to grow indoors. You can grow chamomile indoors using chamomile seeds or chamomile seedlings. Here, you’ll learn how to grow chamomile indoors year-round as well as how this daisy-like flower can alleviate many ailments. 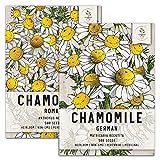 When growing chamomile indoors, you’ll want to choose either of the two main varieties: Roman chamomile or German chamomile. These are the herbs found in commercial chamomile products today such as teas or cosmetics.

German chamomile, Matricaria recutita, also features white petals that droop from its yellow cone. German chamomile is a self-sowing annual that’s known for its profuse upright growth. If you choose to grow this herb, which has a higher essential oil concentration than Roman chamomile, you’ll need larger containers. German chamomile grows to a height of 1 to 2 feet and features an apple-like fragrance. 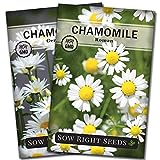 You can grow German chamomile indoors from seeds or Roman chamomile seedlings from your garden center. When planting seeds, fill your container with potting soil. The soil should be moist, but the pot should have good drainage. You’ll want to wet the soil thoroughly when you sow seeds of chamomile. Spread the seeds over your soil; the seeds are small and difficult to plant individually. If you overseed, you can thin your seedlings later on.

Press each seed into the soil; however, try not to cover them completely. Place the container in a south-facing window. The plants will need about 6 hours of direct sunlight each day. You can use a grow light when growing chamomile indoors as the plants need light to germinate. If your house is too cold, you may want to use a heating pad under your container to ensure seed germination. Use a spray bottle to mist your soil daily. The seeds should sprout in about two weeks. When your seedlings reach 3 inches in height, you should spread them out, in different pots if necessary, so that they grow about 8 inches apart.

If you choose to plant seedlings, place them in your organic potting soil and follow the care tips below to keep your young plants healthy.

Your chamomile plants need about 6 hours of direct sunlight each day. Growing chamomile indoors in a south-facing window is ideal.

The best potting soil for chamomile should have some organic matter. For instance, potting soil with vermiculite, peat moose, or coconut coir is best.

Water your chamomile plants roughly once per week. However, check your soil more frequently to ensure it’s moist. You may need more frequent watering; however, don’t overwater this drought-tolerant plant, and be sure your pot has drainage holes.

The best indoor environment for growing chamomile plants is around 68 degrees Fahrenheit.

Not all gardeners opt to fertilize chamomile; however, weak soil will produce top-heavy plants with weak stems. To ensure that your plants grow strong and thrive, consider adding a slow-release fertilizer or fish emulsion to your soil about each month.

Your chamomile should be ready to harvest anywhere from 60 to 80 days. You may begin harvesting chamomile when its flowers bloom. The flowers should be completely spread out (not curled toward the yellow center). It’s best to harvest the drooping flowers first. To harvest, simply pull each flower from the step gently.

You can air-dry your chamomile flowers or place them on a baking sheet and dry them in the oven on a low temperature. Once dried, store the flowers in an airtight container such as a lidded glass jar. Avoid crushing the flowers until you intend to use them.

Chamomile does not require pruning, but it may require thinning if your plants are growing too profusely together. Also, by plucking the flowers as soon as they’re ready for harvesting and leaving the stems behind, you can promote more plant growth.

You can propagate Roman chamomile by cuttings or division. German chamomile grows from seeds and is self-sowing.

Chamomile is popular for making tea. The crushed flowers (about a teaspoon) can be added to boiling water to prepare chamomile tea. The attractive flowers may be added to salads or used as an edible decoration for cakes and other pastries. People enjoy the apple-like taste of the herb.

Chamomile has been used medicinally since ancient times to treat many ailments. Many women have relied on chamomile tea to help relieve menstrual cramps. The tea has also been known to alleviate muscle spasms. Many people also find that soothing chamomile tea has a calming effect and may help prevent or relieve insomnia. Chamomile also has anti-inflammatory properties. Chamomile is not recommended for women who are pregnant.

How long does chamomile take to grow?

Chamomile is typically ready to harvest between 60-80 days. The plant is ready for harvesting when its flowers are fully open.

How often should you water chamomile indoors?

Chamomile is a drought-tolerant plant so you should not overwater it. Usually, you can water it once per week. Check to ensure that the soil is moist but not overly wet. The plant needs watering if the soil is dry.